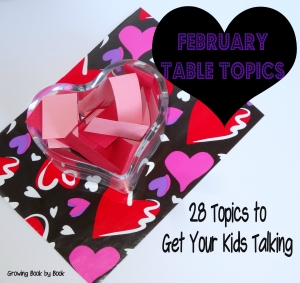 Welcome back to our year long table topics series.   Each month in 2013, I will share a list of “table topics” that will help to get the conversation rolling at your dinner table.  If you are a teacher, these will make great lunch room table topic starters.

All you need to do is print the topics.  Cut them into strips.  Place them in a decorative container.  Put the container on your table.  Each night, select one topic to discuss over dinner.  It will also be helpful this month to have USA placemats at the dinner table.  Viola, the table conversation is now ready to start!

This month all of the topics are centered around the USA!  Click here for the February Printable Topics.  Let’s get talking!

Which three states have the shortest names? (Ohio, Iowa and Utah)

If you could visit Disneyland in California or Disneyworld in Florida, which one would you choose?  Why?

Which state is the smallest and which is the largest?  (Rhode Island and Alaska)

What state would you love to visit?  Why?

How many states border Missouri?  Which ones border the state? (8-Kansas, Iowa, Illinois, Arkansas, Tennessee, Nebraska, Kentucky and Oklahoma)

Alabama was the home to George Washington Carver.  Carver discovered over 300 uses for peanuts.

Houston, Austin, San Antonio and Dallas are all cities in which state? (Texas)

Did you know that the largest underground cave in the USA can be found in Kentucky?  It’s the Mammoth-Flint Cave System.

Which state is an island? (Hawaii)

What states have you visited?

Did you know that Louisiana has the largest crayfish population in the world?  98% of the crayfish come from Louisiana.

Topeka is the capital of which state? (Kansas)

Which state is the only state in the lower 48 that touches only one other state? (Maine)

According to the U.S. Geological Survey, there are 140 towns and cities in the U.S. that have the word “Christmas” in their names.

What is the longest continuous river in the USA (Mississippi River)

Which state can Mount Rushmore be found in?  (South Dakota)

Which state is known as the “Land of Lincoln”? (Illinois)

How many states start with the letter C?  (3- Connecticut, Colorado and California)

What state were you born in?

Can you find 3 states that touch the Pacific Ocean?

Did you know that Wisconsin is the dairy capital of the USA?

Which state is a peninsula? (Florida)

What are the two states that have their names in their capital cities too? (Oklahoma City, Oklahoma and Indianapolis, Indiana)

If you traveled from a state on east coast to a state on the west coast, what route would you take?

Name the eight states that start with a vowel and end with a vowel? (Alabama, Alaska, Arizona, Indiana, Iowa, Idaho, Ohio and Oklahoma)

Each month there will be a theme to the table topics.  Some are fun.  Some are serious.  All are meant to get your creative juices flowing and develop language skills.  Here is a look at the year.

Check back at the end of February to get the March topics.  Better yet,  subscribe to our RSS Feed so that you don’t miss any of this year’s topics!

Please see the linky directory at the bottom of the page to see where this post has been linked. 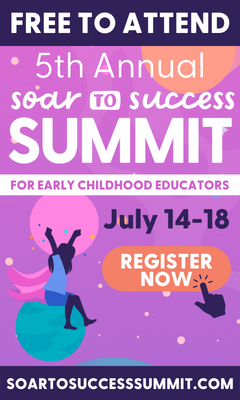