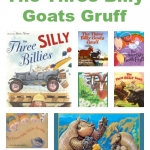 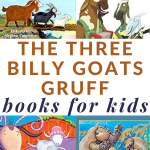 We have been reading variations of The Three Billy Goats Gruff children’s books.  So, today we are sharing some that we have read along with some reviews of versions of the traditional tale. 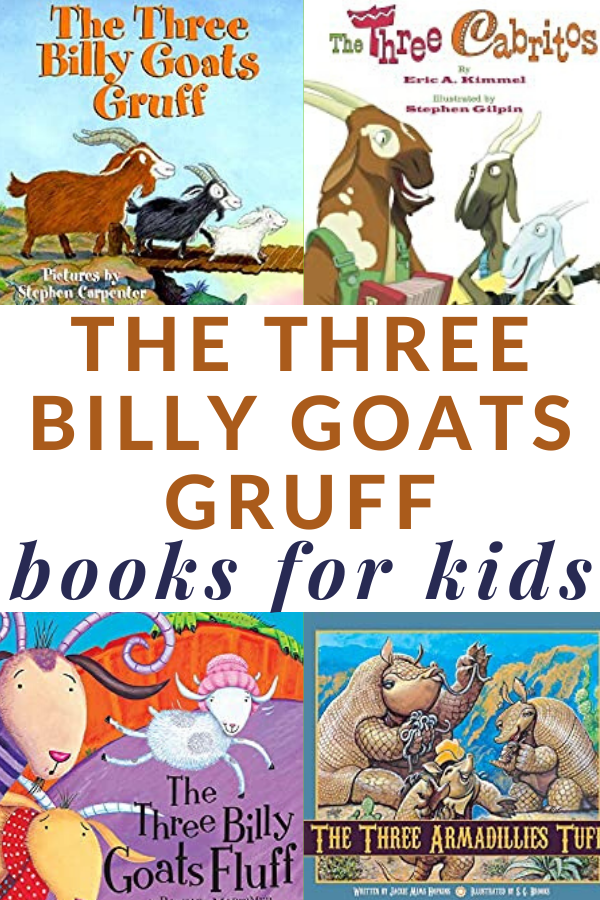 Twists on the Traditional Tale

The Three Billy Goats Fluff by Rachael Mortimer is the tale of a troll who is upset that the goats keep trip trapping over his bridge making all sorts of noise.  He gets angry and threatens to eat the goats.  The billy goats run home and tell their mom who comes up with an idea.  She knits each of the goats’ soft booties to wear when they cross the bridge. Momma goat also sends along a little present for the troll to help apologize for her three goats making so much noise when they cross the bridge.  A super sweet little tale!

The Three Bully Goats by Leslie Kimmelman turns the tables on the traditional version of the story.  Here the goats are the mean characters and the ogre is kind and cute!  As each goat crosses the bridge he stops and harasses the ogre. But, the ogre teaches them a lesson when he suggests that the goats might want to check out the tall grass in the meadow knowing there is a family of skunks waiting to give them a smelly surprise.

The Three Silly Billies by Margie Palatini starts with the goats trying to cross the bridge and being stopped by a grumpy, stumpy man who demands a buck for crossing.  The goats don’t have enough money.  They decide to create a carpool to collect enough funds to cross.  Several more characters join their carpool and then eventually raise enough change to cross the bridge.

The Three Cabritos by Eric Kimmel is about three cabritos (goats) on their way to a Mexican fiesta.  The carbritos have to cross a bridge where the Chupacabra is waiting.  Each goat plays a little to distract the monster. The Chupacabra sends the first two cabritos away and sets his sights on the biggest cabrito.  Big cabrito has a musical surprise for him that lands the Chupacabra withering away until he shrivels into a small little prickly dried up speck.

The Three Armadillies Tuff by Jackie Mims Hopkins is about three armadillo sisters who cross through a drainpipe to get to the other side of the highway.  On their journey, they encounter a coyote who would just love to have armadillo chili.  When the big sister encounters the coyote she encourages the coyote to join them for a girl’s night out!

The Three Silly Girls Grubb by John and Anna Hassett is about three girls who have to cross a bridge to get to school. Under the bridge is an ugly boy named Bobby who demands their lunches.  The first two girls tell him to wait for the biggest girl for she has 12 jelly donuts.  When she arrives, she plants 12 big kisses on Bobby and that changes him into an upstanding student who now attends school and goes by the name of Robert.

The Little Blue Bridge by Brenda Maier is the story of Ruby and her brothers who want to cross the bridge to get to the tasty blueberries.  But, Santiago demands a snack as each sibling tries to cross.  Well, Ruby won’t be bullied by the creature and comes up with a clever way to cross.

There are several versions of the traditional tale of The Three Billy Goats Gruff.  Here are our favorite three.

In some versions, the ogre or troll can be quite scary looking.  For very young children, I suggest The Three Billy Goats Gruff by Stephen Carpenter.  It is one of our favorite versions of the story.

Paul Galdone has a version of The Three Billy Goats Gruff that is beautifully illustrated.  The troll is a bit scarier looking in this version though.

The Three Billy Goats Gruff by Tom Roberts is made even better by the cd audio that you can get to accompany the book narrated by Holly Hunter.  It is part of the Rabbit Ears Storybook Classic series.

You can also listen to me talk about some of these books in the video below.

Enjoy reading and comparing all of the versions of The Three Billy Goats Gruff!

P.S.  Get our newsletter for FREE!  Sign up here.